Being part of a pretty big family, I never had an outsider as a babysitter. Usually my grandmother would take care of me when my mom was working or out. If not her, usually my aunt and/or cousins would make sure I was okay. So I never had the real ‘babysitter experience‘ as they call it.

But if I did have a babysitter or a nanny, I wouldn’t have minded if she were anything like Camilla from 1990’s cult film by William Friedkin, THE GUARDIAN. I mean, she’s hot, has a sexy accent, and likes to bathe naked outdoors without a care in the world. Sure, she’s some sort of druid who would have probably sacrificed me to a tree guarded by wolves, but I’m sure the risk would have been worth it. Why complain?

Unfortunately, there are some things to complain about THE GUARDIAN itself in terms of its narrative, as well as other things. But hey, it doesn’t star Kevin Costner or Ashton Kutcher! That’s a tree worth growing in Brooklyn, isn’t it?

PLOT
A young couple named Phil (Dwier Brown) and Kate (Carey Lowell) have their first child before moving into their new home. Both wanting to continue their careers, despite the baby’s arrival, they advertise for a nanny. Their first choice mysteriously has a terrible cycling accident, leading to mysterious English hottie, Camilla (Jenny Seagrove), to be hired instead. Camilla moves into their home, which begins some strange things for the couple and their friends. Eventually, we learn that Camilla is some kind of tree spirit or druid that takes nanny jobs in order to find babies and sacrifice them to a tree that’s protected by wolves. Apparently this tree can also heal Camilla as she’s part of it. Can this yuppie couple stop Camilla from sacrificing their child? Or is it worth it just to see her bathe nude in the woods? As a non-parent, I’m pretty torn…

REVIEW
THE GUARDIAN brings back a 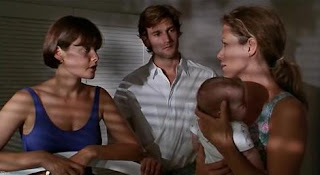 lot of memories for me. I loved this film back in the early 90s, when my mom would rent it from the video store, or when it would play on a cable station. I always found it to be pretty trippy at times, as well as being content in watching Jenny Seagrove bathe in the middle of the woods nude [helped speed up puberty]. I honestly hadn’t watched this film since, probably, the mid-90s, so it was a treat to feel all nostalgic about THE GUARDIAN. While it isn’t as good as I remembered it, to be honest with you, there’s still something about it that I like even with its many flaws.

The problems for THE GUARDIAN [based on the 1987 Dan Greenburg novel, The Nanny] lie within the narrative. The way the story’s presented sets up why the story should have been better than it actually is. For a thriller to be successful, there should be a sense of mystery and suspense that will keep viewers guessing and watching. The story needs to build up to some huge revelation that will either shock the viewer or keep them satisfied if they figured it out. THE GUARDIAN bombs right out of the gate with this aspect of the narrative. Right from the start, we know that the film is about some sort of tree spirit who babysits infants in order to groom them for some sacrifice to see tree god or something supernatural like that. This is told to us via a title card, which honestly should have been shown to us somewhere within the film. Also, the very first scene before the credits is of Camilla sacrificing a baby to this very tree. Right there, the mystery is given away and there’s nothing to surprise us later on. Does the film suck because of it? No, it’s still watchable. But it would have been more effective watching our lead protagonists, or in this case the more active Phil, to figure this out and have all this revealed from his perspective. Instead, we already know the answers before anyone does. The film still is decently fun, but would have been stronger if we knew less about Camilla from the start.

Also, there’s not much depth to Camilla’s reasoning for what she does. It’s hinted that she was some sort of guardian to this tree and they’re connected physically and mentally. But it’s never really explained why this is even happening. Why is this tree being fed with babies? Does Camilla bring this tree everywhere she goes? Is she even a human being? What about the Druids – what are their roles in all this? We don’t much about anything about the supernatural stuff because it’s never really explored. We can speculate and most likely figure out what’s going on, but it would have been nice if the characters did as well and transferred that information so clueless people could get the message this film is trying to send. The supernatural aspect ends up feeling more superficial rather than deep, even if it’s still interesting nonetheless.

Also feeling superficial are the characters, especially Phil and Kate. They’re likeable, which helps make THE GUARDIAN more than watchable. But we barely know anything about them. Kate is pretty much absent or a non-presence for much of the film, which sort of weakens her marriage to Phil. Phil is the more active of the two, but besides his name and job, there’s not much substance to him. Obviously, he starts having lustful feelings towards Camilla – due to the fact that he probably hasn’t gotten laid in a while due to Kate’s pregnancy, and because Camilla enjoys being naked around him. But nothing really comes of it, so it’s just there because it’s cliche. And Ned was there just to be a victim – nothing more 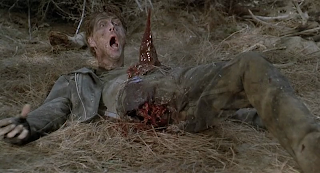 , nothing less. But at least the characters are likeable enough, even if they are stereotypical.

Camilla is at least interesting only because she has actual motivations and does everything in her power to make sure her goals are met. She wants to sacrifice a baby? She’ll pose as a kind nanny in order to get the child she needs. Someone in the way of that? She’ll hurt that bitch in a bicycle accident. You want to rape her? Her tree and her wolf friends will rape you. You follow her and figure out Camilla’s secret? She’ll make you remember the only way a secret stays hidden is if only one person knows about it. You got the hots for her? She’ll make you have wet dreams. Camilla doesn’t play games and will make sure she accomplishes her goals. This character drives the film and keeps it entertaining, regardless of the flaws the narrative has.

THE GUARDIAN has pretty decent special effects. It isn’t a majorly gory film, but it does have some nice stuff for those who love their blood. We get an impalement, skin getting ripped off, some chopped limbs, and even a head bashed in. The tree is pretty bad ass in THE GUARDIAN. It kills those who endanger its mission. In a great scene, it actually caresses Camilla as it heals her wounds. The location of the woods look very fantastical as well, looking beautiful and very creepy at the same time. The practical effects were well done as well. Very good production designs here.

The direction by William Friedkin, best known for his works on THE FRENCH CONNECTION and THE EXORCIST, is pretty great. Originally meant as a Sam Raimi project [would explain the evil tree], Friedkin constantly asked for rewrites in order to feel a connection to the project [which would explain why the narrative isn’t as good as it ought to be]. Even though the script ended up being pretty shallow, the visuals have a ton of depth. There’s a lot of style here, with pretty cool camera movements [very Raimi-like at times], and moments where the film feels really bleak and creepy. In fact, there are some really nice tense and suspenseful moments, especially during the final act of the film. The picture also looked quite nice, and the editing was good. The visuals are probably the best part of THE GUARDIAN. Friedkin has been hit-and-miss during his long career, but THE GUARDIAN is one of his better directed films. 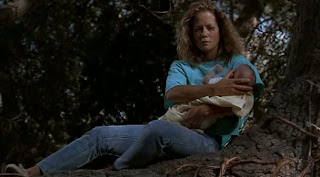 the show in every way as Camilla. Her British accent is very alluring and sexy. She also gives the character an edge and an aura of mystery that gives her quite the presence on screen. Plus she looks great naked. I’m surprised she didn’t become more high profile because she did a bang up job in this flick. Without Seagrove, THE GUARDIAN would fall apart. Dwier Brown is decent as Phil. He doesn’t really get enough time to really shine, but plays his cliche part well. Carey Lowell is a decent actress, but she isn’t really in the film long enough to be anything substantial. Mrs. Richard Gere deserves better. It’s a decently acted him, but the star shines brightest on Jenny Seagrove here.

– Camilla sacrifices babies to a tree. That finally explains why Lisa Stansfield has been around the world and can’t find her baby.

– One of the potential nannies was killed by riding her bike over a pothole. That “Live Strong” wristband sure came in handy, didn’t it?

– Phil had a nightmare involving his son, some wolves, and a creepy tree. Well, that’s one way of getting morning wood.

– Don’t try to rape a tree spirit. She’ll find out the root of the problem and make you branch out into other activities, like dying.

– Phil had a dream about screwing Camilla. I’ve had a similar problem once. But when I heard that nasal voice and that laugh, I just ended up performing a Mr. Sheffield on myself.

– Ned was afraid of coyotes attacking him. I don’t see why he’s so worried. Those ACME products always backfire.

– Kate had no qualms about running over a wolf. She must be Team Edward, that bitch.

THE FINAL HOWL
Sometimes it sucks growing up, 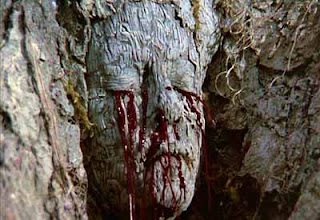 because I didn’t enjoy THE GUARDIAN as much as I had many years ago. Still, it’s a watchable and decent movie that does a lot of things right as much as it does wrong. The direction is great, as there is a nice amount of tension and creepy moments to satisfy fans of the genre. Plus you get a really memorable performance by Jenny Seagrove. It’s a shame the narrative didn’t have more depth and explained things better in detail, as well as fleshing out the protagonists. Definitely an average movie, but worth branching out to rent or stream if you have a thing for hot British nannies not named Mary Poppins.